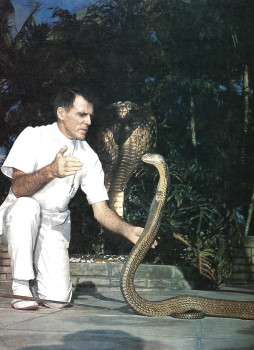 The great legendary Bill Haast, pioneer of venom production for venom research since 1946, founder and director of the world renowned Miami Serpentarium Laboratories, at the age of 100 has now faded into the mist of history.

He was a beloved, admired, and courageous humanitarian who dedicated his life to producing high quality venoms to the research community worldwide, in the hopes that by making them available in a research-grade form and in great abundance, it would stimulate the investigation into nature’s treasure chest of active biological substances and unlock the mysteries and the healing power of venoms. He has, without question, done more to advance the use of venoms in medicine and science than any other person in the world.

He originated the concept of using cobra venom to cure polio, and other venoms for the treatment of arthritis and multiple sclerosis. He was the first person to self-immunize against snakebites, which enabled him to donate his life-giving blood to 21 victims of snakebites, all of whom survived. In the late seventies he was flown to Venezuela to donate blood to a small boy in the jungle bitten by a tropical coral snake. The boy survived, and Bill was made an honorary citizen of Venezuela.

He has been honored with commendations and proclamations from Presidents, Mayors, and countless community organizations. He was most recently bestowed with the gold key to the county of Dade, Florida and honored with a day, April 4, 2008 dedicated to his name in Miami, his adopted city. His list of accomplishments over a lifetime is too great to be listed here, but please visit this official website of William E. Haast and the Miami Serpentarium Laboratories for more biographical and historical information in the near future.

Truly one of the last great American heroes, he passed away peacefully in his home in S.W. Florida on Wednesday evening, June 15, 2011.

Attitude, rather than disposition is more definitive of serpent behavior. From the moment they emerge into this world until they complete their life cycle, their attitude is "Don't tread on me. I am well equipped to defend myself, but content to pass through life unnoticed. I mean no harm to anything or anyone that our creator has not provided as my bill of fare; I am self sustaining and I like it that way, please pass me by."
- W.E. Haast

While we at the Miami Serpentarium and all of Bill's friends and associates throughout the world are deeply saddened by this loss, the Laboratories will continue to provide the scientific and medical research community with the same high-quality venoms for research. If you wish to purchase venoms, we invite you to telephone (800) 248-5050 or e-mail and we will be happy to be of service.

It is not the critic who counts; not the man who points out how the strong man stumbles, or where the doer of deeds could have done them better. The credit belongs to the man who is actually in the arena, whose face is marred by dust and sweat and blood; who strives valiantly; who errs, who comes short again and again, because there is no effort without error and shortcoming; but who does actually strive to do the deeds; who knows great enthusiasms, the great devotions; who spends himself in a worthy cause; who at the best knows in the end the triumph of high achievement, and who at the worst, if he fails, at least fails while daring greatly, so that his place shall never be with those cold and timid souls who neither know victory nor defeat.
- Theodore Roosevelt